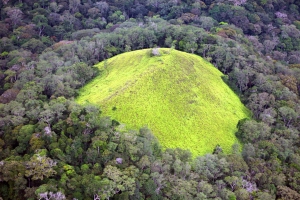 NB:  Times are given in UK time/BST

In recent years, there has been unprecedented interest in planting trees on a massive scale to combat global warming by carbon sequestration. The value of forests as carbon sinks is in addition to many other proposed benefits of planting trees from producing the oxygen we breathe to stopping the spread of the Sahara. This seminar takes a (lighthearted) look at popular beliefs about trees and forests by attempting to ’bust’ the forest ‘myths’. The results of a test may vary from myth busted, myth confirmed, or results ‘uncertain’ (because it depends on where, when, at what scale the myth is tested). Also the test itself may be considered ‘unsuitable’. Uncertain results are important for potentially indicating caution in applying blanket tree-centric policies where geographic or other sources of variability are important.

William Bond is an Emeritus Professor in Biological Sciences at the University of Cape Town. He served as Chief Scientist for the South African Environmental Observation Network (SAEON) from 2014 to 2018. He is an ecologist with broad interests in the processes most strongly influencing vegetation change in the past and present, including fire, vertebrate herbivory, atmospheric CO2, and climate change. In addition, Professor Bond has worked on plant-animal mutualisms and on plant form and function. Particular research interests include grasslands and savannas, and winter-rainfall shrublands. He has served on the Boards of the South African National Botanical Institute and of Cape Nature and on the editorial boards of several journals. He has published more than 200 peer-reviewed scientific publications and co-authored three books. He is a Fellow of the Royal Society of South Africa and was made a Foreign Associate of the US National Academy of Sciences in 2013.