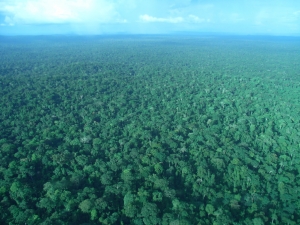 The phylogeographic structure refers to the way phylogenetically related species or populations are distributed across spatio-environmental gradients. These patterns are studied in the frameworks of community ecology (inter-specific level) and population genetics (intra-specific level) but usually using different data analysis tools. However, it is possible to use a common descriptive framework at the two levels and attempt a comparison. Here, Olivier will use examples from tropical African forests to illustrate how the phylogeographic structures can inform on population or community processes.

At the intra-specific level, the phylogeographic structures observed among populations of African tree species seem to result essentially from (past) biogeographic isolation, possibly driven by Quaternary climate changes (forest refuge hypothesis). However, these phylogeographic structures established early, sometimes during the Pliocene, and while they might have been reinforced during subsequent glacial–interglacial cycles, interglacial phases did not lead to genetic homogenization. Therefore, interpreting phylogeographical patterns of African trees must account for a much deeper past than previously assumed, and cannot be limited to the last glacial period, reflecting their slow population dynamics.

Olivier Hardy is based at the Université Libre de Bruxelles and leads a group conducting research in population genetics and community ecology, with a special interest for African tropical forests.

Deconstructing Compensation: Benefit-sharing and co-dependency between oil companies and indigenous communities in Russia and AlaskaInside a tropical montane forest: Understanding patterns of plant diversity and ecosystem functioning across the Andes
Scroll to top