Surviving the Anthropocene: a story of biological gains as well as losses 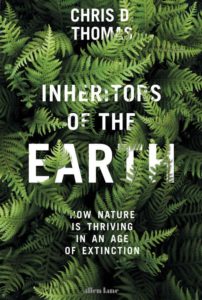 Speaker: Professor Chris D Thomas, Department of Biology, University of York, author of Inheritors of the Earth: How Nature Is Thriving in an Age of Extinction

Today, we contemplate the biological losses that are taking place on Earth, as humans exterminate species, remove habitats, alter the atmosphere and ocean chemistry, change the climate, and unleash invasive species across the planet.  Some suggest that we are already en route to the Sixth Mass Extinction.  Yet, life on Earth is a story of gains as well as losses.  The processes that generate diversity did not suddenly stop when humans pitched up on the planet.  In fact, they accelerated – change is how life on our planet has always survived, and this remains true in the Anthropocene.  Chris Thomas will argue that a majority of species are spreading into new areas (at least somewhere in their ranges) and that the diversity of species is growing in nearly all regions of the world as a consequence of the movement of species – biological invasions.  He will also argue that increasing numbers of species are adapting genetically to the human-modified world, and that new species are starting to form, usually stimulated by the transport of species around the world.  Bizarre as it might seem, the speciation rate on Earth (on land) during the Anthropocene could possibly be higher than ever before, and the evolution of humans could be initiating a Sixth Great Genesis – as well as a Mass Extinction. Since gains are taking place, humans should not treat nature like an old master that requires restoration, but develop a conservation philosophy that accepts and promulgates change that is beneficial to current and future generations of humans.

Chris D. Thomas is an ecologist and evolutionary biologist, best known for his work on the risks to biodiversity from climate change and the impacts of habitat fragmentation. He has published over 275 scientific articles on biodiversity and environmental change. He is a Biology Professor at the University of York, a Fellow of the Royal Society, and President-elect of the Royal Entomological Society. In his new book, Inheritors of the Earth: how nature is thriving in an age of extinction, Chris is taking a fresh and perhaps surprising perspective. We may be in the midst of a mass diversification event on Earth, as well as a mass extinction.

Interrogating the governance landscape of mangrove forests in Kenya and Zanzibar: implications of complexity and fragmentationBold retention targets now needed for effective biodiversity conservation in the Anthropocene
Scroll to top