‘Green Deserts’ to ‘Forests of Plenty’: An Archaeology of Tropical Forests 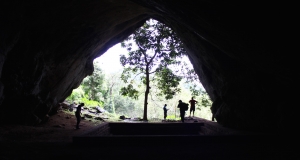 Difficult working conditions, poor preservation, and environmental determinism have seen tropical forests traditionally framed as ‘blanks’ on the map of human history – avoided by human societies until industrialized extraction led them to become some of the most threatened land-based environments on Earth in the 21st century. Here, Patrick highlights how the last three decades of research, and utilization of inter-disciplinary approaches, have seen tropical forests go from ‘Green Deserts’ to archaeological ‘Forests of Plenty’. Moving through time, he demonstrates that the varied forests of the tropics are now i) a key part of the variable environmental context that framed the emergence of Homo sapiens in Pleistocene Africa and its dispersal across most of the world, ii) sites of some of the earliest experiments with cultivation and origins of many of the domesticates that end up in our kitchens today, and iii) habitats that hosted some of the largest pre-industrial urban settlements on the face of the planet. Finally, Patrick argues that it is the last half a millennium of colonialism and imperialism that has left us with the stereotype of tropical forests as sparsely inhabited in the past. Only by acknowledging the deep human relationships with these ecosystems can more equitable conservation approaches be developed on regional and global scales.

Patrick Roberts (DPhil and MSc Archaeological Science, BA Archaeology and Anthropology) is a W2 Research Group Leader at the Max Planck Institute for the Science of Human History, Jena, Germany. His research applies multidisciplinary approaches to explore the past interactions of our species with forest environments across the tropics, from Africa to Australia, and from the first evolution and dispersals of Homo sapiens in the Pleistocene to the development of urban societies in the Late Holocene. He has authored over 60 peer-reviewed scientific papers and the monograph ‘Tropical Forests in Prehistory, History, and Modernity’ published by Oxford University Press. Patrick has taken part in UNESCO conservation symposia and currently leads the ERC Starting Grant ‘PANTROPOCENE’ that is investigating the degree to which pre-colonial and colonial impacts on tropical forests influenced earth systems on continental and planetary scales with legacies for the 21st century. Patrick also holds affiliations with the University of Queensland and the University of the Philippines and is co-founder of the ‘Pantropica’ research network.

Woody encroachment as a symptom of global changeFrugivory and seed dispersal: insights from Madagascar’s biodiverse ecosystems
Scroll to top