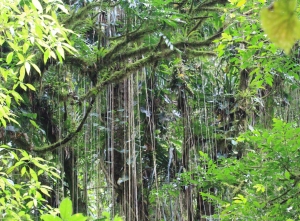 The biodiversity found across tropical moist forests, the most species-rich terrestrial biome on the planet, varies broadly between the high diversity of the Neotropics and Indomalaya and the relatively lower diversity of the Afrotropics. Explanations for this “pantropical diversity disparity” (PDD) remain contested, mainly due to the difficulty in teasing apart the effects of contemporary climate and paleoenvironmental history. After assessing the universality of the PDD across more than 150,000 species of terrestrial plants and vertebrates; the relationship between biodiversity patterns with present-day climate as well as Earth history events was investigated. For the latter, the emergence of biodiversity was simulated using a novel spatially explicit model of diversification (gen3sis) coupled with a paleoenvironmental reconstruction of plate tectonics, temperature and aridity. While contemporary climate is insufficient in explaining the PDD; a simple model of diversification united with paleoenvironmental constraints successfully reproduced the variation in species richness and phylogenetic diversity seen repeatedly among plant and animal taxa. This suggests a prevalent role of paleoenvironmental dynamics, such as mountain uplift, coupled with complex macroevolutionary dynamics in driving tropical moist forests diversity patterns. Simulations indicate that lower diversity in Afrotropical forests is associated with lower speciation rates and higher extinction rates driven by sustained aridification over the Cenozoic. Mechanistically simulating the emergence of uneven diversity in tropical moist forests across 110 Ma of Earth’s history highlights the importance of deep-time paleoenvironmental legacies in shaping current biodiversity patterns.

Oskar Hagen is a biologist, computer modeller and environmental scientist investigating the emergence of biodiversity across scales of time, space and complexity in order to better understand the processes behind Earth’s fascinating biodiversity. About 16 years ago, when deciding what to study, he was torn between my two main areas of interest: Informatics and Biology. Therefore, after acquiring technical skills in informatics, he merged course with Biology and Environmental Sciences, opening up possibilities for his multifaceted interests. Throughout his Master’s at the Theoretical Ecology group (ETH Zürich), he enhanced his mathematical and modelling skills, specifically regarding speciation and extinction processes. His focus was to test and develop eco-evolutionary hypothesis and move closer to ecology and evolution using programming and math as a tool, and not as a primary object of study. After his Master’s, he worked in the public and private sector in different countries (i.e. Switzerland, Laos, Belize, Brazil), always with a link to natural resources management, while continuously undertaking scientific activities and keeping updated with the literature. During his PhD at the Landscape Ecology group (ETH Zürich), he deepened his knowledge on the multiple mechanisms (biotic and abiotic) related with biodiversity gradients and dove into the world of paleo-environmental reconstructions, geodynamics and paleontology. In Germany he is currently a PostDoc at iDiv where he catalyses the integration of eco-evolutionary processes across temporal and spatial scales in search and revision of the multiple proposed mechanisms behind observed biodiversity patterns.

Forests in a changing world: narratives, responses, and outcomesShifting disturbance regimes and the lessons to be learned from forests on the edge
Scroll to top