Are past human activities related to observed biodiversity and carbon dynamics in Amazonian forests? 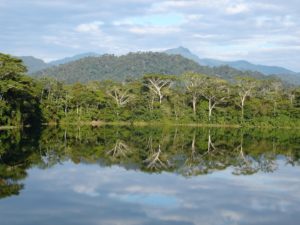 Listen to podcast | View slides  (NB: the podcast and slides cover the first half of the talk only due to the unpublished content of the second half)

Although the Amazon rainforest houses much of Earth’s biodiversity and plays a major role in the global carbon budget, estimates of tree biodiversity originate from fewer than 1,000 forest inventory plots, and estimates of carbon dynamics are derived from fewer than 200 recensus plots. It is well documented that the pre-European inhabitants of Amazonia actively transformed and modified the forest in many regions before their population collapse around 1491 AD, but the ecological effects of the post-Columbian inhabitants of Amazonia remain relatively unexplored. The legacy effect of these past human activities on Amazonian forests remains unaccounted for in many studies using Amazonian forest plots.

Crystal Mcmichael will present modeled distributions of pre- and post-Columbian peoples in Amazonia, and examine the probability of their ecological legacies in the forest plots that are widely used to estimate biodiversity and carbon dynamics. The results show that forest plots are more likely to have been disturbed during the pre- and post-Columbian eras than random expectation. Forest plots with a high probability of disturbance have lower aboveground biomass, higher woody productivity rates, and higher woody loss rates than forests that are less likely to have been disturbed. The data cannot exclude the possibility of pre-Columbian disturbances at these forest inventory sites, but differences in forest structure and diversity are likely attributable to the impacts of forest disturbances from the rubber boom (A.D. 1850-1920). The current network of forest plots may present a skewed picture of Amazonian biodiversity and carbon dynamics because they over-represent forests in early successional status that can undergo rapid growth.

Crystal McMichael is currently Assistant Professor at University of Amsterdam, researching tropical forests and Amazonia.  She gained her PhD at Florida Institute of Technology with her dissertation on Pre-Columbian impacts in western Amazonian forests.  Crystal’s previous work and research includes ecological modeling and remote sensing of terra preta, the response of Amazonian forests to past megadroughts, and assessing the onset of maize agriculture and distribution of ancient people in the Great Lakes region of the United States.