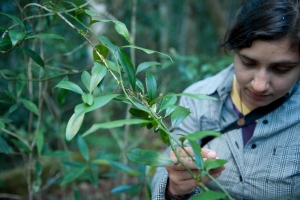 The end-Cretaceous was marked by an ecological catastrophe and extinction that eliminated nearly ¾ of life of Earth. The effects of this event on plant communities have been widely documented in higher latitudes, and have showed a consistent ecological collapse with varying extinction and recovery rates, followed by an increase in the relative abundance of flowering plants around the globe. Biases in the plant fossil record from tropical latitudes have limited understanding the long-lasting effects of the end-Cretaceous on tropical forest communities.  Recently described plant fossils from the Late Cretaceous and Paleocene of Colombia have provided a unique insight into extinction and recovery of tropical forests resulting from the end-Cretaceous event. In this seminar, Mónica will talk about the extinction and ecological change of tropical rainforests, as seen documented by >50,000 pollen occurrences and >6000 fossil leaves from localities in Colombia. Plant diversity declined by 45% at the Cretaceous-Paleocene boundary and did not recover for ~ 6 million years. Pre-extinction rainforests were a mix of ferns, flowering plants and conifers that grew forming open canopies, and sheltered diverse plant-insect interactions. After the extinction, these communities became replaced with Paleocene rainforests that closely resembled modern Neotropical rainforests in plant composition and in having a closed, multistratal canopy structure dominated by flowering plants. These results show that the end-Cretaceous event triggered an anomalously long interval of low plant diversity in the tropics and led to the assembly of today’s most diverse terrestrial ecosystem.

Mónica Carvalho is a Colombian botanist and paleobiologist. She obtained a BSc in Biology at the Universidad de Antioquia (Medellín, Colombia), a MS in Geosciences at the Pennsylvania State University in the U.S., and later obtained a Ph.D. in Botany from Cornell University. She since joined the Smithsonian Tropical Research Institute as an Earl S. Tupper Postdoctoral fellow and is currently funded by the National Science Foundation. Her work aims to understand how plants and tropical ecosystems have changed through geologic time. She studies leaf fossils in combination with experimental approaches on plant function to address the biology of past ecosystems and the evolution of tropical rainforests.