Untangling the History of Neotropical Biodiversity: The Big Picture 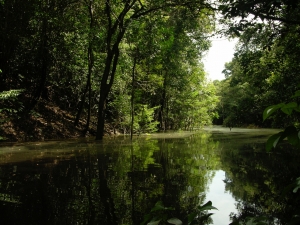 BOOK HERE for this OCTF online seminar followed by Q&A – all welcome. NB – all times given in UK time

Few issues have been as intriguing and exciting to scientists as the origin and evolution of Neotropical Biodiversity. Yet, relatively little is still known about the evolutionary relationships among Neotropical organisms and the factors that have shaped the high species diversity currently found in this region. It is clear that both historical and ecological factors have played key roles in species diversification and the assembly of biotas, calling for true cross-disciplinary studies. Integrative approaches, including information from systematics, ecology, evolution, geology, paleontology, and climatology, among others, are not just useful but critical for a better understanding of current diversity patterns and its drivers. To understand the history of Neotropical biodiversity, Lucia conducts broad scale studies that look at whole biotas, as well as detailed studies focused on a key Neotropical lineage. She discusses the scientific contributions of those findings for biodiversity conservation.

Lúcia G Lohmann obtained her PhD in Ecology, Evolution, and Systematics from the University of Missouri-St. Louis (2003) and conducted her postdoctoral work at the Missouri Botanical Garden (2004). She has been a faculty in the Department of Botany at the University of São Paulo (Brazil) since 2004 and was a Visiting Scholar at UC-Berkeley between 2017-2019. She is also the Executive Director of the Association for Tropical Biology and Conservation (ATBC) and a member of the São Paulo Academy of Sciences (ACIESP). Her primary research interest is to understand patterns of diversity and biogeography in the Tropics. Her research is highly integrative combining components from systematics, ecology, evolution, geology, paleontology, and climatology to understand the drivers of biological diversity, especially in the Amazon. She recently received the honor of “Corresponding Member” of the Botanical Society of America (BSA) which is awarded to “distinguished senior scientists who have made outstanding contributions to plant science and who live and work outside the United States.”

The ecophysiology of Australian tropical rainforestsThe truth about nature: Environmentalism in the era of post-truth politics and platform capitalism
Scroll to top