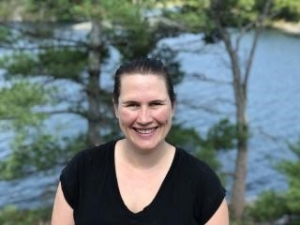 Despite the well appreciated importance of forests in the global carbon cycle, we still do not know how much carbon is stored in Earth’s forests as aboveground biomass, nor how it is spatially distributed. These estimates are crucial for constraining climate models, increasing our understanding of the global carbon cycle, and improving forest management to better mitigate climate change. New satellite missions have been designed specifically to fill this critical carbon knowledge gap, and the first of this next generation is NASA’s Global Ecosystem Dynamics Investigation (GEDI), which is currently collecting lidar data from the International Space Station (ISS). GEDI’s full waveform observations map the Earth surface in 3D, and produce estimates of forest height and canopy cover, as well as empirical estimates of aboveground biomass. More than a year of GEDI observations are currently publicly available, with >5 billion measurements. This talk presents the GEDI mission’s framework for estimating biomass from these lidar waveforms, and highlights current challenges, including remaining uncertainties in dense tropical forests. The application of GEDI data toward forest conservation efforts will also be discussed.

Laura Duncanson is an Assistant Professor of Geographical Sciences at the University of Maryland, College Park. She received her B.Sc Hons. from Queen’s University in Kingston, Ontario, MSc at the University of Victoria, and PhD from the University of Maryland, College Park in 2015. Her research focuses on using lidar remote sensing for biomass mapping, ecological studies, and policy relevant applications including forest conservation. She has worked with spaceborne lidar for over a decade starting with ICESat’s GLAS, and has worked for the past five years on algorithm development for GEDI’s biomass products. She was a NASA Postdoctoral fellow at NASA Goddard from 2015-2017, and many of her projects involve collaborations between the University of Maryland and NASA Goddard. She sits on the science teams of NASA’s Carbon Monitoring System, GEDI, ICESat-2 and Arctic Boreal Vulnerability Experiment, is project scientist for the bilateral ESA-NASA Multi-Mission Algorithm and Analysis Platform being developed for collaborative algorithm development and lidar/SAR biomass mapping, and is co-lead of the Committee for Earth Observing Satellites (CEOS) Working Group on Calibration and Validation (WGCV) Land Product Validation (LPV) Biomass protocol.