People of the Rainforest: The Villas Boas Brothers, Explorers and Humanitarians of the Amazon 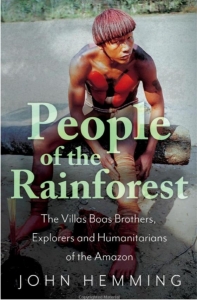 The young Villas Boas brothers became South America’s most famous explorers in their day, by leading the first government-sponsored venture to cut into Amazonian forests (rather than by river) followed by years of further trail-cutting and mapping. They used their media fame to help the indigenous peoples of the upper Xingu throughout the second half of the twentieth century. They devised a new method of interacting with these peoples, treating them as friends, helpers and equals; they completely changed Brazilian public opinion, to regard these as a proud element of national culture rather than semi-savages; they made five exciting first contacts with potentially hostile peoples; and they achieved the remarkable feat of controlled change, so that a score of tribes evolved in only two generations from pre-literate hunter-gatherers with rudimentary agriculture to familiarity with all aspects of modern ‘civilisation’ without losing their pride in their well-ordered communal societies. They had the radical idea of protecting a huge area of tropical forests, just for the native peoples living in it. After nine years of tough political struggle, this led to the 26,000-sq.-km Xingu Indigenous Park, the first of its kind in the world, which has been replicated throughout South America and led to the protection of a significant proportion of the world’s surviving rainforests. With the protection and administration provided by the Villas Boas, the Xingu became a mecca for over fifty anthropologists during three decades. Extremely famous as ‘national treasures’ in Brazil, the brothers are curiously little-known in the rest of the world.

Dr John Hemming has visited over forty indigenous peoples in Brazil (including four at first contact), and written a three-volume 2100-page history of them, as well as eight other books relating to Amazonia. His expeditions include leadership of the Maracá Rainforest Project (1987-88) with some 200 scientists and técnicos. He was Director of the Royal Geographical Society for 21 years.

Citizen science and botanic knowledge among herders and farmers in Kenya: the Sapelli mobile data collection appLessons from intensifying agriculture
Scroll to top