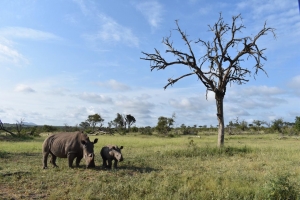 It is increasingly recognized that state-owned protected areas alone will be insufficient to conserve the biodiversity on which human well-being depends. In southern Africa over the past few decades, we have seen a proliferation of conservation efforts on privately and communally owned land. In South Africa, privately conserved areas now cover over double the land area conserved in state-owned protected areas, and we see similar trends in several other southern African countries. Ecotourism and hunting enterprises in these areas also contribute significantly to the economy, particularly in rural areas, and South Africa’s Biodiversity Economy Strategy is focused on growing and transforming the wildlife economy. Despite the emphasis being placed on privately and communally conserved areas as both a conservation and development strategy, little is known about their landowners’ motivations, resultant management strategies, and ultimately, the resilience of this emergent conservation mechanism to the winds of socioeconomic and environmental change. Rhino poaching presents a major challenge, there are growing global anti-hunting sentiments, and the pandemic shut down revenue streams in 2020. Hayley will present on her research aimed at understanding the social-ecological dynamics and resilience of conservation beyond state-protected areas in southern Africa.

Hayley is a researcher at the Centre for Sustainability Transitions, Stellenbosch University, South Africa. She is an interdisciplinary conservation scientist who is interested in applying social-ecological systems thinking to identify resilient and equitable conservation opportunities in a changing world, with a focus on southern Africa. Her PhD at the University of Cape Town assessed the drivers of private land conservation in South Africa. She undertook postdocs researching protected area effectiveness at Monash University (Australia) and resilience indicators at Stellenbosch University. Hayley currently leads two research projects: (1) Assessing the role of sustainable use for biodiversity conservation, people and economies in southern Africa and (2) Quantifying the biodiversity planetary boundary for Africa, through a continent-wide collaboration of biodiversity experts.