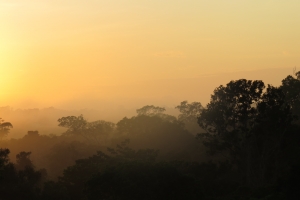 With over 5.5 million km2, the Amazon is one of the largest natural ecosystems in our world. The area hosts vast diversity and is also a large carbon store. Recent work showed that while 16,000 species of trees may inhabit the area, just 227 (1.4%) of them contribute 50% of all individuals. Over 11,000 (62%) species have population sizes less than 1 million individuals and make up less than 0.12% of all individuals of the Amazon. The fact that the area is dominated by so few may simplify the research into its functioning, focusing on the hyperdominants but the extreme rarity of so many species makes the study of diversity a challenge. How is this diversity distributed in space and among the angiosperm phylogeny and is there a link with its functioning? Can we predict how the Amazon will be affected by global change?

Hans is keenly interested in the study of plant diversity and mechanisms generating and regulating diversity at regional and local scale with a focus on the Amazon Rainforest. He has built up a large network of collaborating colleagues in the Amazon and outside: The Amazon Tree Diversity Network. This network studies patterns and processes of species composition, relative abundance patterns, and functional behaviour of the Amazon forest, and its evolution.  His primary inspiration for wanting to work in the Amazon was the Walt Disney’s ‘Wonders of Wilderness’ based on the films ‘True Life Adventures”. He started his tropical experience working with epiphytes in forest in Guyana, climbing canopy trees. After that he lived and worked for ten years in Guyana managing the Tropenbos Guyana Programme and doing his PhD research. After leaving Guyana, he concentrated on patterns of diversity in the greater Amazon, and initiated the Amazon Tree Diversity Network in ~2003, now over 200 persons strong. From 2001 – 2012 he mostly worked at the Utrecht University and in 2012 I moved to Naturalis Biodiversity Center, the Dutch National Natural History Museum.