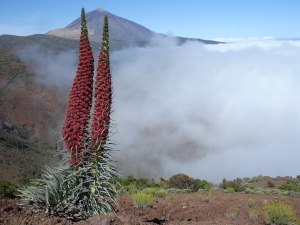 Listen to podcast (slides not available)

Woody plants (trees and shrubs) cover 30 percent of the planet’s land area and offer crucial ecosystem services. It is unclear, however, why some plants are woody and others herbaceous. To this day, scientists have failed to provide satisfying answers, probably because wood formation is a complex process that can be triggered in different and largely understudied ways. As a first essential step to solve this evolutionary puzzle, Frederic has compiled a database including ca 7000 derived woody species – representing over 600 independent evolutionary transitions from herbaceousness towards (derived) woodiness during evolutionary history of flowering plants. His database shows that these species mainly occur in continental regions with a marked drought period, and a number of hydraulic experiments in stems have supported the novel idea that derived woody species are more drought resistant than their herbaceous relatives. The hundreds of independent transitions suggest that the genetic mechanism leading to woodiness should be relatively simple, which is supported by a shrub-like woody mutant of Arabidopsis in which two flowering time control genes are knocked out. Outcomes of this project will hopefully revolutionize our understanding of wood formation, one of the most influential evolutionary innovations on earth.

Frederic is a senior researcher at Naturalis Biodiversity Center. During his PhD period (2000-2005), he studied evolutionary and ecological signals in the wood anatomy of flowering plants. His postdoc internship in the Sperry lab (Univ. of Utah, USA) taught him how to perform water flow measurements in stems, which enabled him to functionally interpret wood anatomical observations with respect to different levels of drought stress resistance between species, with particular emphasis on the ultrastructure of intervessel pits. The outcome of this anatomical-hydraulic work has resulted in an award-winning paper on maples in New Phytologist (Tansley Medal for Excellence in Plant Science in 2010).

Frederic is also interested to know what are the genes that have turned on the wood pathway in all these hundreds of derived woody groups using gene expression and QTL experiments in Arabidopsis and relatives. He hopes his research could contribute to complementary directions, such as inducing woody and thus more drought resistant and taller phenotypes in otherwise herbaceous crops that may help us to produce more food in a world where plant growth will become more demanding due to climate change.

Taking a landscape perspective on social and ecological resilienceCitizen science and botanic knowledge among herders and farmers in Kenya: the Sapelli mobile data collection app
Scroll to top