Forests and water: advances and controversies 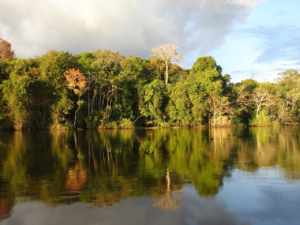 Recent research has increased our understanding of how trees and forests influence water availability. But major controversies remain. For example, until recently most atmospheric scientists were confident that forests don’t attract rain, but new research challenges that confidence, and suggests that forests play a vastly more significant role in maintaining global rainfall patterns than was previously realized. Is this really a whole new value for forests? Come and decide for yourself.

Douglas Sheil is a professor at the Norwegian University of Life Sciences (NMBU) in Ås, near Oslo, Norway.  His research relates to the ecology and conservation of rain forests. He worked with IUCN-the World Conservation Union in East Africa and then, after completing his doctoral studies in Oxford, moved to the Center for International Forest Research (CIFOR) in Indonesia, where he was based from 1998 to 2008.  He then became the director of the Institute for Tropical Forest Conservation in the Bwindi Impenetrable World Heritage site in Uganda for four years, before spending a year in Southern Cross, NSW, Australia, and then moving to Norway.  Douglas remains a Senior Research Associate of CIFOR as well as Adjunct Professor of Southern Cross University, New South Wales, Australia. He is the Winner of the Queen´s Award from the Commonwealth Forestry Association 2015.