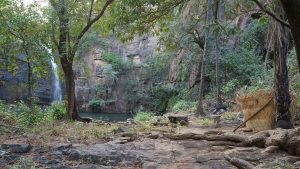 Our species, Homo sapiens, evolved in the African continent some time before 300 thousand years ago (ka). Historically, this emergence has been situated within the grassland environments of eastern or southern Africa. However, the growing consensus that there was no single centre of endemism in Africa for our species now means that a range of regions and ecological zones are being considered for their role in human evolution. The rainforest and savannah mosaics of western Africa, and ecotonal regions therein, are in particular emerging as central to understanding processes of population separation, adaptation and change. When did humans first inhabit these environments, or did they only serve as barriers? If they served as barriers, how did their shifting dynamics shape human connections in the past? If these environments were indeed exploited by early humans, how important were they, and what was their impact? In this talk, recent research in western Africa is presented and discussed within these major new themes in human origins.

Eleanor Scerri holds a PhD in Archaeology (2013) from the University of Southampton and is the W2 “Lise Meitner” leader of the independent research group on Pan-African Evolution at the Max Planck Institute for the Science of Human History in Jena, Germany. Eleanor’s research focuses on the articulation between material culture, genetics and biogeography to understand pan-African processes of human evolution. She is currently running a major fieldwork programme across a West African transect in order to recover new palaeoecologcal, archaeological, fossil and genetic data and illuminate evolutionary processes in this long-neglected region. She is also leading a number of other projects using pan-African datasets in order to reconstruct major, continental processes of change in the deep human past. Aside from these research projects, Eleanor is also developing a number of methodological projects that aim to unlock the potential of diverse datasets. She has authored over 45 publications in these various research fields. Eleanor also holds an affiliated Associate Professorship at the University of Malta, her alma mater, and is a faculty member at the Institute for Prehistoric Archaeology, University of Cologne, Germany.