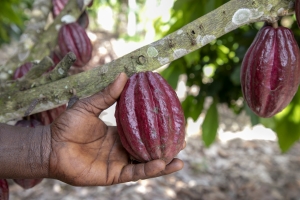 Film screening and Q&A followed by drinks – all welcome.

If you have eaten chocolate recently the chances are the cocoa in it was grown in the Ivory Coast – the West Africans produce 40% of the world’s cocoa. Cocoa is grown there exclusively by smallholder farmers, but in an attempt to improve their yields a growing number of farmers are cutting down forests to plant their crops.  If they continue at the current speed it’s estimated Ivory Coast will have little standing forests left by 2034.

The regulations to tackle this are failing. Last year, the leading organisation responsible for monitoring standards in the cocoa industry was reported to have regularly approved cocoa from West African farms that have contributed to deforestation. We need to protect forests by working with the people that have a direct impact on them. Long-lasting forest protection only happens when governments, businesses, NGOs and communities work together to find land-use solutions.

Many companies committed to achieve no deforestation in their supply chains by 2020. Still large areas of the forests of West Africa are lost each day. There is hope – technology can and is speeding up the transition towards zero deforestation. Now it’s time for the chocolate and cocoa industry to move away from compliance and consider the needs of cocoa farmers. That way we can enhance their livelihoods and protect the remaining forest areas and endangered species that live within them.

Bastien Sachet is CEO of Earthworm Foundation, a global non-profit which supports businesses to protect and regenerate forests and soils around the world. Bastien helped coordinate the organisation’s palm oil strategy, heading up teams in France, Switzerland and Africa. He also launched the Rurality programme, which works to empower smallholder farmers.

Climate change risk of tropical forests across spatial, temporal and biological scalesPOSTPONED: Defaunation and trophic cascading in the Anthropocene: ecological erosion in the tropics
Scroll to top