Assisted natural forest regeneration: How polyculture in degraded rainforest can restore the landscape, biodiversity and create sustainable income for local and indigenous people 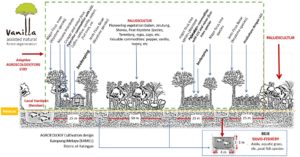 Deforestation is the second biggest cause of climate change, largely caused by commodity agriculture.  Indonesia has between 6-11 million hectares of degraded forest.  Meanwhile the company pledges to stop deforestation are largely not working and REDD+ leaves local people out of the equation and lacks scale.

Jake Backus and I. Madé Setiawan will talk about their project to restore up to 2 million hectares of degraded forest in Indonesia using forest polyculture based on the high value anchor crop of rainforest vanilla, with the aim also of proving that it is both a scalable concept and has greater economic value, biodiversity and cultural benefit than palm oil production and other destructive alternatives for local and indigenous people.

I. Madé Setiawan is an agroecologist from Bali, who has a Masters in Medical Anthropology from the University of Amsterdam and PhD from University of Illinois at Chicago (UIC), School of Public Health.  Madé lives in Oxford and has worked with the world’s largest REDD+ project with indigenous communities looking at viable alternatives to logging and mining, and the avoidance of forest fires.

Entangled territorialities on the fringe of development: an investigation on riverine peoples of the “Terra do Meio” and the impacts of the Belo Monte dam in the state of Para, Brazilian AmazonFactors for success in developing a REDD+ project in the Chyulu Hills landscape of southern Kenya and its integration into a model for long-term conservation financing through multiple ecosystem payments
Scroll to top