Understanding dimensions and implications of legal trade in wildlife 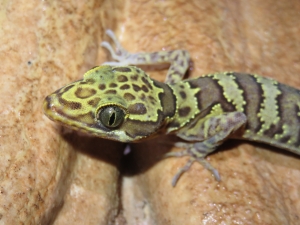 Generally when wildlife trade is mentioned in the context of conservation we tend to think almost exclusively about illegal wildlife trade and its impacts on a subset of charismatic species. Yet international regulations only include a small subset of species relative to the many thousand we depend on and understanding the true dimensions of trade and its impacts is crucial to ensuring that unsustainable trade does not threaten the survival of species. Here Alice explores the true dimensions of global trade, with a special focus on the reptile trade. Like many smaller species reptiles have generally been overlooked by international regulations, and only 9% have CITES coverage. Here using a combination of approaches she shows that almost 40% of species are in trade, with around half individuals coming from the wild, and up to 75% in groups like the lizards. She also highlights trade for a number of different taxa, where it particularly impacts on threatened species, and the implications for both species survival and as a potential source of zoonoses and invasive species. She also looks spatially at where species are most impacted (in terms of the number of species, and number of particularly vulnerable species) in relation to other drivers of species loss to highlight urgent priorities and species at double-jeopardy of exploitation and habitat loss and destruction hotspots. Lastly she discusses options for reducing the risk from wildlife trade, to biodiversity globally in addition to human and wildlife health, and the huge advantages from the implementation of such a system.

Alice is an Associate Professor and leads the Landscape Ecology group at Xishuangbanna Tropical Botanical Garden, Chinese Academy of Sciences. She has worked extensively across the Tropics, and previously held positions in Thailand, Australia, Costa Rica, and the UK before moving to China. Alice is the author of around 72 papers, with a further 16 currently in review.
Alice’s work focuses on patterns of biodiversity and drivers of biodiversity change, at various spatiotemporal scales in order to develop pro-active management strategies that aim to mitigate the impacts of human activities on biodiversity. Her research spans from biogeographic research to conservation prioritization and management, and the development of tools for conservation biodiversity monitoring and assessment. This work includes understanding patterns of diversity, including that of cryptic species, and the processes behind the divergence and biogeography of species based on a combination of approaches. Her work also includes developing new tools for monitoring biodiversity patterns for bats, such as the use of bioacoustics, and other site based prioritization techniques. In addition she and her team try to better understand the impact of development on species even at an individual level and assaying how such development changes patterns of behaviour and stress.